Let’s resume what I said in my last two articles: on one hand, the representational aspect of videogames is always shifting, in the sense that the moving image in front of the player is different in each playthrough, and that no two players will ever see the same game in the same way. On the other hand, we should not forget that the mechanics governing the movement of this image are quite fixed, and are not wholly under the player’s control, because it is the designer who decides how much freedom exactly he’s going to allow in his game. Our question now: what lies between these two extremes of the player’s agency and the designer’s control?

In one word: possibilities. So, here’s my proposal: instead of Sid Meier’s “game as a series of interesting decisions”, let’s try out “game as a series of interesting possibilities”. Or even better: “a good videogame is a series of interesting possibilities”, because I’m thinking mainly here of videogames (although I think this qualitative statement can also stretch out to traditional games), and I’m less trying to understand what games are than what games are good at. Truth be told, I’m not fond of definition (that’s usually when name-dropping Wittgenstein is expected), and this is not a rigorous academic paper, so consider this idea as a modest proposal, without any presumption of being all-encompassing or definite. Still, I have my reasons: I prefer thinking in terms of “possibilities” because it stands closer to this intersection of player and designer while “decisions” puts the focus on the player. These decisions have been designed beforehand, so the designer is not completely neglected in Meier’s canonic definition, but it’s the player who ultimately decides, and therefore the emphasis is on him. “Possibilities”, though, is probably closer to the designer’s end, because he created these possibilities in the first place, but it also represents how the player sees a game, how he experiences it: “this or that may happen, I may do this or not, etc.” Also, “possibilities” is more inclusive since it can cover these so-called not-games like Proteus or Dear Esther, in which the player doesn’t have a lot of options, even though these games are rich in possibilities (the procedurally generated island of Proteus or the random selection of the fragmented narration in Dear Esther). It thus removes the idea of challenge, which I do not find necessary: to use a classic example, how is Snakes & Ladders challenging? The player has no decision to make (he merely follows the dice), but the game is fun because of its numerous possibilities, which are born out of the game’s design, the careful arrangement of snakes and ladders on the board.

In short, I prefer “possibilities” because of its inclusiveness, and because I’m more interested in how a game presents itself as a series of possibilities than in the decision-making process that goes inside the player’s head. As I stated in my last article, videogame criticism should not focus on what the player actually decided to do in his playthrough, but on the fact that he was confronted with a choice to begin with. And this is what “possibilities” refers to: not exclusively to one player’s experience of the game, but also to all possible experiences of the game. This is the key difference between videogames and traditional art forms: like I wrote in my first article, a videogame critic has to review an object that will never appear again in the same way he encountered it, and that he probably didn’t fully explore, maybe didn’t even finish. What would be inexcusable in film criticism (leaving a theater before the end of a movie you have to review) is pretty much expected in videogames criticism, at least for longer games or MMOs (even for the average 6-8 hours games, we don’t ask reviewers to evaluate every difficulty level, find every collectibles and hidden passages, or unlock all achievements). Like Richard Terrell said recently, the "full experience" of a game is an elusive concept.

I think “decision” doesn’t properly convey this elusiveness typical of videogames: after a decision is made, a game seems more linear than it really is, because our decision transforms one of the game’s possibilities in an actual event. One playthrough of a game is a linear experience, but it does not constitute the entirety of what a game can be; as Chuck Klosterman proposed some years ago, instead of “what does this mean” maybe we should ask “what could this mean”. A game is ever-changing, but the process of deciding is always the same, even though the decisions themselves are not. Focusing on “decision” thus hides the protean form of videogames by referencing a well-known process that we can experience daily. “Possibilities” though is harder to define, partly because strictly speaking they don’t exist: by definition, a possibility is something that could be but never will, because if it does happen it’s not a possibility anymore but something real.

Let’s take the most essential possibility in most games: losing. Winning a game is satisfactory because I could have lost but didn’t. The possibility of losing enhance my winning (or more exactly make it possible, because if I can’t lose, I cannot really win either), but the fact of losing is less satisfactory than its mere possibility. We can say then that the possibility of failing is interesting as long as it remains a possibility – it’s true though that failing isn’t always frustrating, and that the more we fail beforehand, the more we’re going to savor our victory, so it’s best if losing doesn’t remain at all time a possibility, at least when challenge is an important part of the game design. In our last attempt though, when we do win and finish the game, this time we didn’t lose, but we could have failed again, and for this last try losing remained a possibility. The other times we lost before just help to make this possibility even more potent. A good game, then, is a game where losing represents an interesting possibility, where failing is integrated in the gameplay in a meaningful way (Dark Souls would be a good example).

For most games, there are at least two possible meaningful possibilities: losing and winning. In a narrative game, the knowledge of the various possibilities offered by the game informs how we value our own playthrough: the more options I have for customizing my character in a RPG, the more my avatar is going to feel personal because of all the other possibilities I did not choose. We tend to forget these possibilities we didn’t explore when we talk about a narrative game: when we analyze a game like Mass Effect, we do not speak of all the times Shepard died and was miraculously reborn. The numerous deaths of our Shepard are apocryphal or alternate universes that we put aside when we tell the game’s story, but we shouldn’t because they are an integral part of the game, even if it doesn’t make much sense story-wise. The Reapers feel like a real threat because I can die while trying to stop them, so the challenge helps me understand the difficulty of Shepard’s task (it’s not challenging enough considering the nature of the Reapers, but this is another discussion). In a movie, I can feel the danger indirectly, when the movie tries to suggest that a character could die, but this possibility is artificial because the story is fixed and pre-determined, while in Mass Effect Sheppard can really die at any moment.

Most narrative games use the player’s failure in this manner, by offering a challenge that supposedly mirrors the one the character is going through. In such a game, actually failing is not interesting plot-wise, because it creates incoherence in the story (unless you stop playing after your first death, but this usually makes for a rather short and disappointing game); however, the possibility of failing is meaningful, because it can enhance our identification with the character. Mass Effect is a representation of the challenge Shepard is facing, and the game expresses itself partly through the various possibilities it offers (obviously in such a RPG, which focuses on player’s decision, there is a lot of other meaningful possibilities besides the character’s death). This is where the unique expressiveness of videogames lies: in what can happen but didn’t, more so than in what the player really did. Or, more aptly put, the value or the meaning of what the player did comes chiefly from the other possibilities that remain as such in the course of a playthrough.

Hence this proposal, which I will try to adopt on this blog: a good videogames is a series of interesting possibilities.
Published by Sylvain L. at 09:25 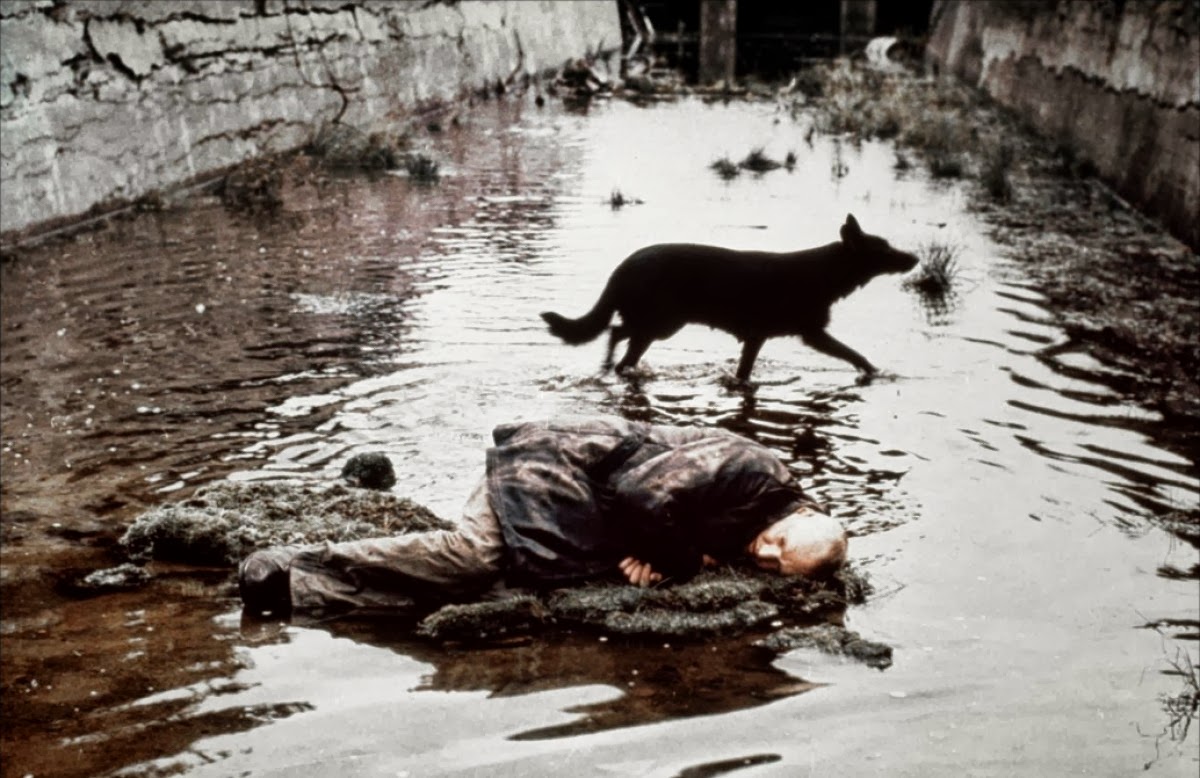 Sylvain L.
Montréal, Canada
I write for a film magazine in Montreal, Séquences, and I recently began a passionate relationship with videogames. I'm first and foremost a film lover, but in the last year my passion towards movies began to weaken, while my love of games continued to grow. I wrote a lot in the last four years about cinema, in French, at first on my own blog and then for the magazine I'm still working for, but now I'm obsessed with games, mainly with their potential as a possible art form, so I needed a new private virtual space, away from cinema and closer to games, where I can write about the interrelations between these two mediums, especially in terms of images, while continuing to explore in this new direction my usual obsessions (nature of art, criticism, a bit of philosophy). Writing in English is a first for me, and although I'm quite familiar with this language, I'm still insecure when it comes to writing, so my grammar and syntax aren't, for now, as good as I would like. Like all blog, this one is a work in progress, and I hope my writing skills will improve with time, so I can erase as soon as possible that part of my presentation...